Connor did not know much about the history behind the number though realised upon using his new locker,

“He’s a life member of the club. I think as time goes on I might get in contact with him and ask him a few questions.”

James Walker played for Fremantle from 1999 to 2007. He took over the number from another important name in Fremantle Dockers history – Gary Dhurrkay. Dhurrkay was tragically killed in 2005 in a car crash though his name lives on in the club with 51 games played from 1995 to 1998.

Connor who wore number 20 at Swan Districts and for WA’s State under 18 side said he felt like part of the team with the new jumper number allocation.

“Nineteen is one closer to 20…having this number, you feel a part of the team,” he said.

Fremantle assistant coach Simon Lloyd said that great responsibility is placed upon the new recruits with the jumper number allocation. 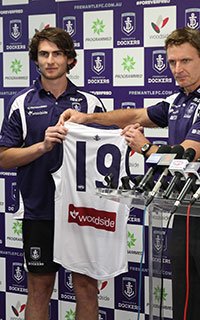